We are parked end to end and this new camper insists on parking his car right between our campers leaving no room for us to pull out to go to town. By now, we had only one space left between us and them. He then adds yet another car, now there are a total of three! Two in the back between us, and one in the front. Wow, I figured how rude is that! We had lost a good 12 feet or more of our campsite because he needed what little space we had left, and all of his. 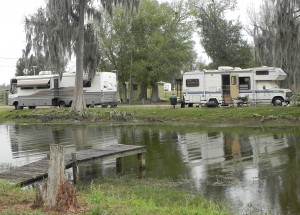 Hmmm, what to do… I simply caught him and his friends gone that were parking between the campers and put up a sign. “Campsite Occupied” in the area they were parking and moved the grill, chairs and table in that space! He/they got the hint. I even allowed him enough space to put one car between us on my side. He chose to move it to the front! Sometimes, a subtle hint is all it takes!

Well, I can’t really say it was subtle, but at least it was a way of letting him know he’s encroached my space without having to confront him about it! lol’s